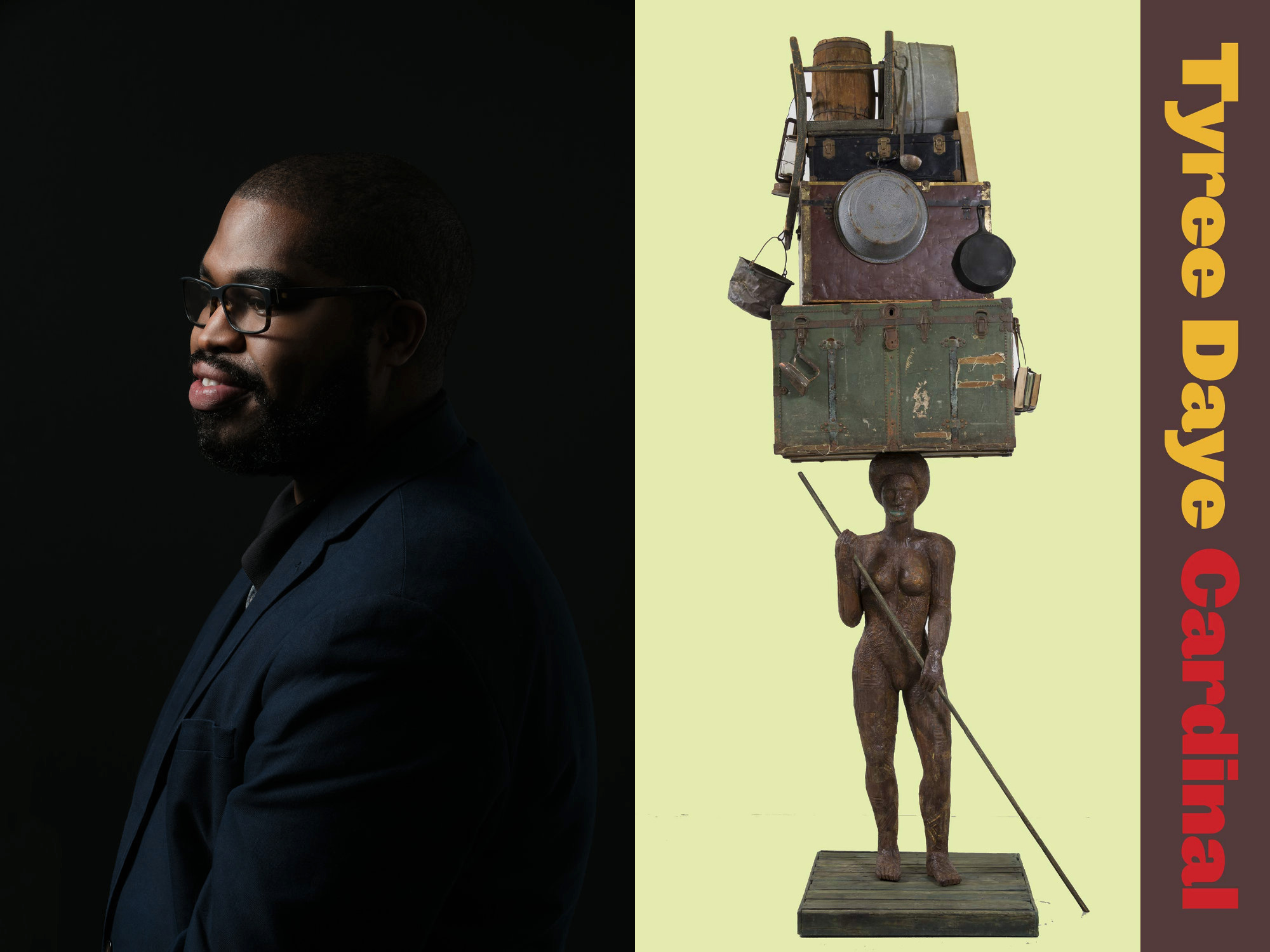 We have a New Suns subscriber and friend to thank for this book being in our box—shoutout to Reuben, who recommended it and read it ahead of us to make sure it would be a good fit. Tyree Daye’s stunning collection draws from Victor Hugo Green’s Green Book in creating a poetic guide through a landscape that is so deeply rooted in the blood of Black people that Daye finds himself carrying it in his veins wherever he goes. In addition to mapping the geographical South, Cardinal presents a topography of relationships, dirt roads winding and unfurling from Daye to his mother, to the bodies of his grandmother, uncle, and son. Interspersed between the poems are full-color family photographs, like landmarks of memory blurred by death and time.

The book opens with two epigraphs, one from the Green Book, one a lyric by Nina Simone. I decided to put Nina Simone on shuffle as I read. As I navigated the poems—which read like a roadtrip, meditative and circling—it felt right to hear her crooning, “He ain’t coming home no more” in the background.

These verses are full of echoes, a line in one poem reflected in the title of another, images of birds and fields and stars spanning the entire collection. Daye has a remarkable way of layering colors and symbols with meaning. Take the title of the collection, Cardinal: cardinal as in a bird (flight, migration, leaving, prey to be shot down out of the sky), cardinal as in the train from Chicago to New York (where Daye’s cousins speak of Harlem as “a heaven”), cardinal as in cardinal directions (“I ran 95 north, 95 south, 40 west, 40 east”), and cardinal as in red (the color of blood). The green fields where generations of Daye’s family have toiled are steeped with the same violent racism that led to the publication of the Green Book, such that green is the color of being rooted in history-that-is-also-family (“I want [my mother’s] green thumbs / wound around a squash’s neck / to be wound around my wrist / telling me to stay longer”). Blue becomes the color of endless possibility and freedom his ancestors never had (“I wanted to place an ocean in my mother’s backyard,” “My wings are blue / and I touch the sky”); Daye frequently speaks of himself in terms of purple, the combination of red and blue: a bluebird with the blood of his dead on his wings, the ocean his grandmother may never have seen washing up on the shores of a land built on the labor of enslaved people. Every time I reread a poem, I find new depths and connections I didn’t make before. These colors and images form constellations that lead you through the pages, in addition to the actual constellations in the first and last poem in the collection, which are drawn out with asterisks, chevrons, and lowercase 'i's.

What I love best about Cardinal is the nuance and complexity with which it questions Daye’s conflicting desire to both stay in the South and leave, from his complicated relationship to the home that both raised and wishes to kill him to reflections on how being Black in America means being unsafe in America (“I’ve never been through airport security / without being pulled to the side and searched / to know you can die anywhere / doesn’t feel like flying anywhere”). These remarkably tender verses are filled with love, grief, memory, and musicality: “if you see me dancing a two-step / I’m sending a starless code / we’re escaping everywhere.”