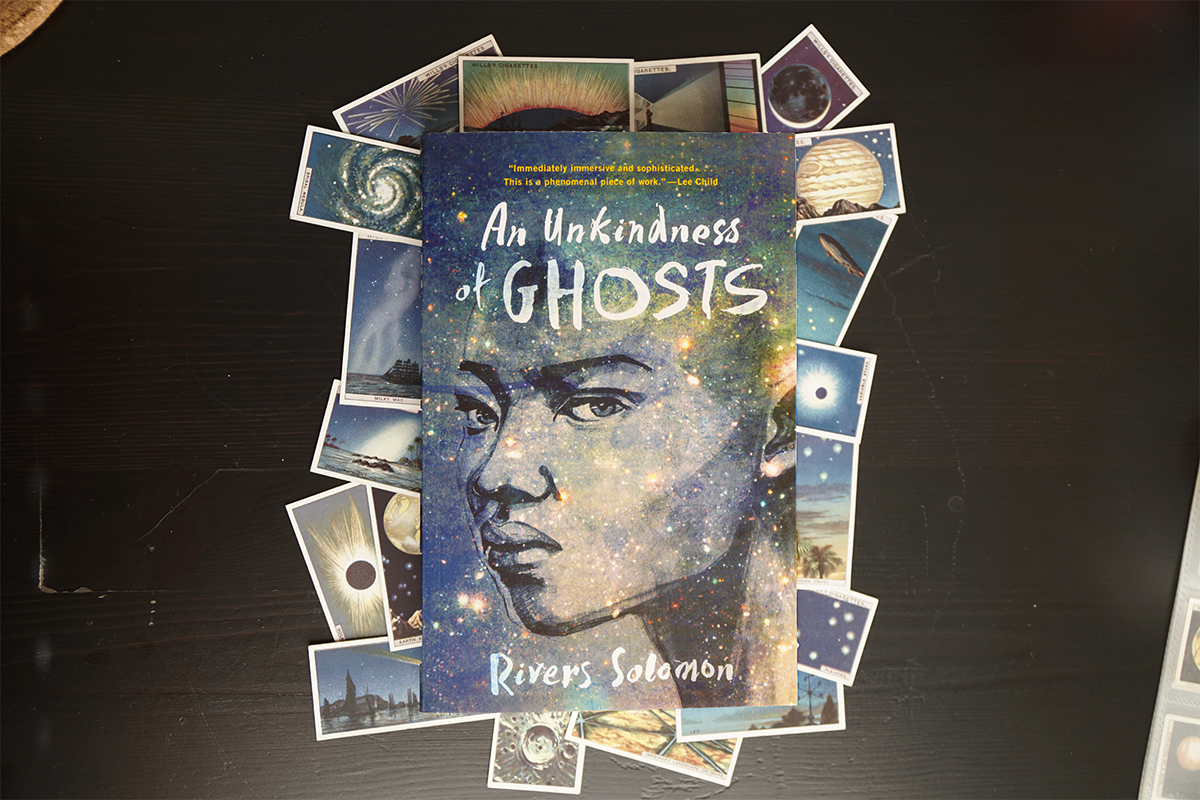 Rivers Solomon has been living in my mind rent-free since I read their 2019 novella The Deep earlier this summer. I was delighted by their debut novel An Unkindness of Ghosts, with its more nuanced exploration of familiar themes: belonging in both past and present, ancestry and Othering. An Unkindness of Ghosts follows Aster’s quest for the truth about her mother’s death, a journey constellated with a cast of characters through whom the novel explores the many ways we find a sense of belonging. Aster Grey is, like her name suggests, a spot of light and life within the unforgiving expanse. Outside of the sharecropping work she does along with other dark-skinned residents (prisoners?) of the spacefaring HSS Matilda, Aster is an outstanding medic in her own right as well as the assistant to her longtime friend Theo Smith, the Surgeon General.

What first caught my attention was on page two, when Aster is attending to a child named Flick and misgenders them — on Q deck, Aster’s home, every person is assumed to use she, while T-deckers use they. My reading notes there say “Gendered decks? Hm. Also, THEY.” It only gets better from there. Solomon interrogates gender first and foremost, perhaps, in Aster herself, who is ostracized for her “mannishness” (which stems from a hereditary hormonal imbalance). Theo serves as a counterpoint to Aster: while occupying a position of privilege as "Heavens’ Hands Made Flesh" — and white-passing at that — he is the effeminate bastard son of a Black woman. Without his title, I think he would be nearly as at-risk as Aster of Othering and extrajudicial violence for his gender nonconformity. There is no shying away from the sexual violence suffered by Black women at the hands of ship guards; though I was prepared, I would still advise readers to be cautious in case such content is distressing.

Aster bounces from Matilda’s X deck belly to a party in E deck and everywhere in between, through vent and field in a jagged spiral into the heart of Matilda. She is haunted by her mother’s ghost, and the novel is interspersed with stories from forgotten mythologies. Aster insists on writing everything down with the utmost precision, but in the second half finds inspiration in letting go of the past. “Without a past, Aster was boundless. She could metamorphose. She could be a shiny, magnificent version of herself.” Solomon through Aster continually questions the value of the past we have: without a living connection to the past, what are we? Are we free, or are we lost? By the novel’s end, I feel like the answer lies in the former. Nevertheless, I found myself wondering if the past is like a blanket that, though heavy, can be grounding and comforting. Maybe some can spin a cocoon from the past for their metamorphosis. Aster ultimately decides to find her own path as she always has, and to pursue change in a context all her own.

An Unkindness of Ghosts had me giggling, shouting, and seething in equal measure. Despite (or perhaps because of) Aster's somewhat distant narration, every victory and every loss hit me hard. It is a novel that I fully intend to experience again soon, and I look forward to seeing what else Rivers Solomon has in store for the world.