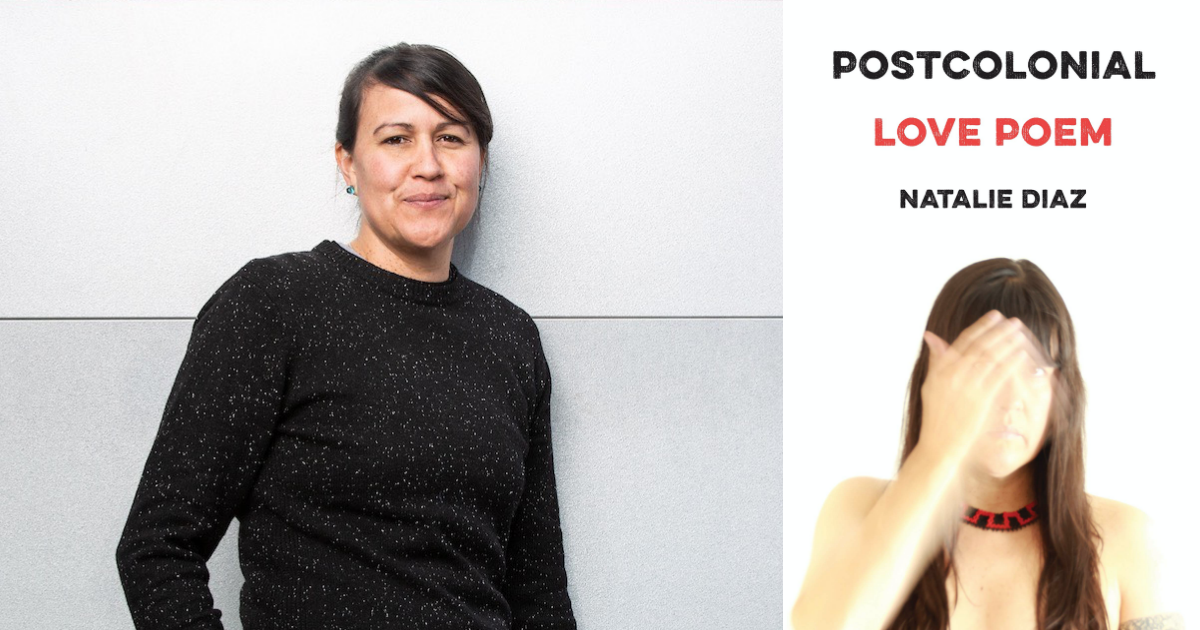 Where to begin with Postcolonial Love Poem? This collection is a fluid journey of hips under hands, basketballs through hoops, green to red, light on darkness. These poems contain a violence that refuses to be healed from, a violence of knives and scorpions and bullets whose sting is transformed to light and tenderness under Natalie Diaz’s deft hands. And by god, there are so many hands in these poems. Hands of light and hands turned guns, hands crushed and hands holding, hands as worship and desire. Hands as kingdom and hands as a means of entering the Kingdom of her hips.

There are so many hips in these poems, too, and all of them belong to her. “Her” here is a lover, a colonizer, a church, a city of amber or honey or green. Diaz blends images from ancient Greece with rez life and modern life and Latinx culture, such that she becomes the Minotaur sailing the body of her beloved, her Nativeness abluting itself through the American labyrinth of her beloved. “Troy, the hollowed horse, an army of desire— / thirty soldiers in the belly, two in the mouth. Beloved, your hips are the war. … Millennium Falcon, let me be your Solo. … Here I must enter you, mi pobre / Manolete—press and part you like a wound...” If you couldn’t already tell, the entire collection pulses with queer sexuality. The body of the beloved is a river; her hips, the precious stones lying on the riverbed, towards which Diaz’s hands are forever reaching, “Go[ing] forward, always down” to the “slick rosary bead” that lies between the “jetties of [her] thighs.”

Where Diaz’s verse isn’t being extremely sensual, it’s weaving the copper strands of drug addiction, injustice, and historical violence against Native bodies into the veins and arteries of her brother’s body—the same brother whose addition to meth forms the center around which her debut collection, When My Brother Was an Aztec, revolves. Now, 6 1/2 years after When My Brother Was an Aztec was published—and 2 years after Diaz received a MacArthur “genius” grant for her work—Postcolonial Love Poem explores the same themes through the twin lens of sorrow and love. Diaz-as-narrator absorbs her brother’s violence towards her, his conviction that the mafia has placed a transmitter in his Polaroid camera, with a quiet, almost passive acceptance: she bleeds because of him, yet understands that hurting her is an expression of his love for her.

It’s difficult to choose a favorite poem from this collection, as I love all of them for different reasons, but some of the standouts for me are “Catching Copper” (“My brothers… keep their bullet / on a leash shiny / as a whip of blood”), “Asterion’s Lament” (“In your hands I am a coming vessel, / an empty boat, willing to be helmsman or helmed, / moored, made fast—shackled and filled”), and the titular “Postcolonial Love Poem” (“Arise the wild heliotrope, scorpion weed, / blue phacelia which hold purple the way a throat can hold / the shape of any great hand—”). Diaz’s poetry is the “lapidary wheel / turning—green mottled red— / the jaspers of [her] desires,” the precious stones weighing tender on the bullet holes of her body that is the page.