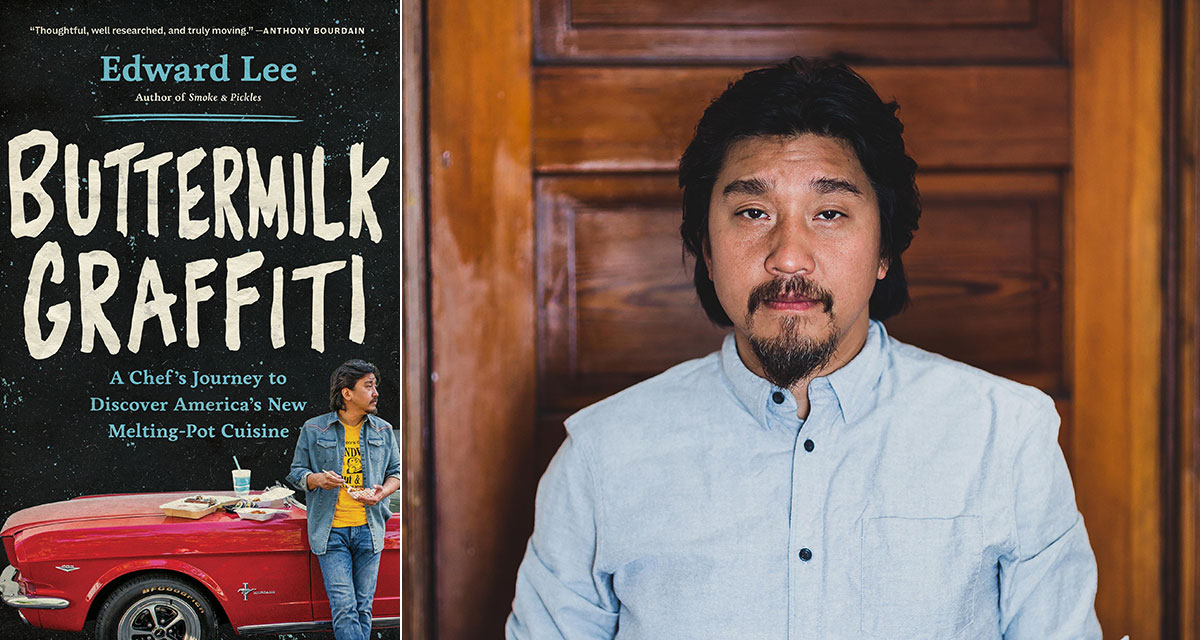 Some books are read for their roots, for the themes that underpin their narratives. Others for their trunk, for the contours of their words and paragraphs that provide handholds as we climb ever higher, supported by incisive turns of phrase and keen conclusions. Still others for their branches, the somewhat precarious invitation away from the pages and into the air, toward the fruit that is borne of both the book and our own speculations. Buttermilk Graffiti provided a hearty climb, and now I work my way slowly around the crown, my thoughts marinating like so many of the recipes Edward Lee provides in his sophomore work.

Lee travels to various corners of America in search of unique cuisines and communities. Along the way, he meets people in and out of the food scene, from fellow celebrity chefs to folks who simply teach him in their own homes; he closes each chapter with a handful of recipes from his travels. In Dearborn, Michigan, he fasts during Ramadan, enriching his understanding of the food and the context in which it is eaten. In Miami, Lee smokes with a professional cigar roller and finds his chef’s palate surprised by a new dimension of flavor. Perhaps the most compelling chapter was his visit to Paterson, New Jersey, where he finds the largest concentration of Peruvian restaurants in the United States. However, Peruvian food is anything but monolithic: an influx of indentured laborers from China in the mid-nineteenth century — rife with abuses and injustices as many such programs — left many men living there after their contracts were up. Many of those men established restaurants known as chifas, and some of their descendants ended up in Paterson when Peruvian immigration began in earnest in the mid-twentieth century. Lee visits a chifa with a menu nearly identical to many other American Chinese restaurants, with the exception of a few popular Peruvian dishes. He waxes unusually philosophic, citing Leibniz and Kant in his musing on the difference between the two, wondering if this is truly chifa if it is here in America.

The question of “authenticity” in food always seems to throw a wrench in my train of thought: arguments for authenticity often veer uncomfortably close to cultural purity, which has never sat right with me. I do believe that someone who has never experienced a culture should not capitalize on food from that culture — food is such an integral piece of culture, after all. But then, I modify lots of traditional foods to be vegan, or else to compensate for ingredients I don’t have. Inauthentic? Yes. Delicious? Usually. I suppose I cook in the canopy, where the branches of so many cuisines mingle above their trunks far below. And where those branches split from the trunk, the meeting of personal and public, of staunch tradition and absolute rejection thereof — that is where Lee places himself in Buttermilk Graffiti, questioning his position within the food landscape not simply as patron or chef, but as one whose own background reflects the melting pot of American cuisine.

There were certainly sticky spots where I mumbled, “Edward, don’t.” He gets chased out of a place for recording people. He talks a bit too much about “culinary DNA” — while I understand the link between food and our very being, framing it with genetics always makes me do a double-take. A couple times, he brings up concepts like how global tragedies indirectly lead to greater culinary diversity, but he doesn’t engage with them very deeply. In an odd way, I preferred it that way, so I could follow those branches at my own pace and return to the book itself when I was ready. Ultimately, I experienced this book in fits and starts, always finding my mind wandering from an observation about the unfamiliarity of lamb broth or 30-year-old fermented butter. And now, as I consider Buttermilk Graffiti from its branches, I find even more lines of inquiry to follow. And follow them I will.